Panipat is a historic city in Haryana. Situated on the banks of River Yamuna, the history of Panipat takes us back to the period of Mahabharata. It is believed that Panipat is one of the five cities found by the Pandavas during the Mahabharat times. It was called Pandavaprastha during that period. When we hear the name Panipat, the first thing we remember is the battle of Panipat. Three important battles that proved to be turning point in the Indian history were fought in Panipat in 1526, 1556 and 1761. This city has been referred to as Dharmakshetra in Bhagawad Geeta.

Apart from historical importance, Panipat is well known for its textile industry. The carpets and quilt blankets made in Panipat are popular for their quality, beautiful texture and designs. All the blankets that are sent to Indian soldiers are made in Panipat. There are many places of historical interest in Panipat. The Salar Gunj gate in the center of the city is one of the important  point of archaeological interest. 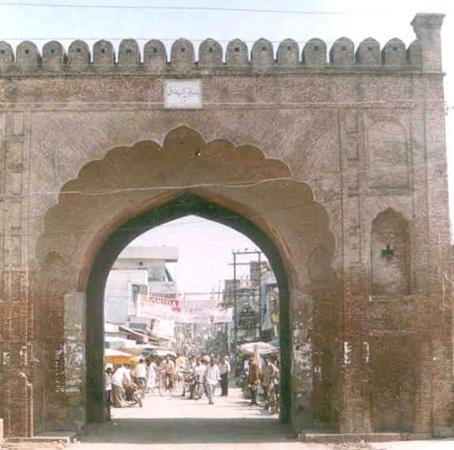 Salar Gunj gate located centrally in Panipat is named after the Hyderabadi Nawab Salar Jung. The gate stands across the main arterial road in Panipat. The Nizam of Hyderabad was a great stooge of British rulers. And all his ministers including the Prime Minister Nawab Salar Jung followed him in respecting the British rule in India. The Nizam took the side of British Government when the first war on independence broke out against the British.

Naawab Salar Jung was so loyal to the British Government that when he came to know about the fact that the freedom fighters were about to attack the residency in Hyderabad, he informed the same to the Government in advance. This helped the residency to prepare in advance and defeat the freedom fighters.
Being happy with the Nawab’s loyalty, the British Government knighted him as Sir and gave him the title of Salar Jung. Officially the Nawab was addressed as Sir Salar Jung and common people referred him as Nawab Sahib.

The Salar Gunj Gate was built by Faiz Nawab Sadak who was an ardent fan, admirer and friend of Salar Jung. The gate is huge and strong in structure. Since the structure is of archeological importance, it is maintained and preserved by the Archeological Department of India.

If you are in Panipat you cannot miss the opportunity to visit this grand structure showing the architecture of ancient period. One cannot stop admiring the beauty of carvings and designs found on this mammoth structure. People who are interested in history and archeology find this place fascinating.

It takes two minutes to reach the Salar Gunj gate from the Panipat bus stand. Today, one can see many local businesses run successfully around the gate making it a popular local market.  People can shop and have food once they are done admiring the beauty of this ancient structure. There are also many affordable hotels located near this gate making it easily accessible by walk. Near or far, when you are in Panipat, visiting Salar Gunj gate must be on your list.